For the discussion of the Legendary Pictures MonsterVerse. This includes Godzilla (2014), Kong: Skull Island and any upcoming films under the MonsterVerse umbrella.
Forum rules
Please be sure to read the subforum sticky "Regarding: Monsterverse Leaks & Unofficial Photos [Updated 7/13/2018]", linked below. Thank you!

It seems everyone has an idea for what should come next. Another Godzilla movie? Another Kong movie? A spinoff for Rodan or Mothra? Introducing a new kaiju like Gamera? But it seems that many are forgetting that sometimes the best is... More of the same?

Godzilla vs. Kong. The Sequel.

*IF* it would happen, what would you want to see? How do you think they'd pit these two against one another AGAIN. And how would it be resolved this time?

Mac Daddy MM wrote: ↑Mon Jun 21, 2021 4:12 pm It seems everyone has an idea for what should come next. Another Godzilla movie? Another Kong movie? A spinoff for Rodan or Mothra? Introducing a new kaiju like Gamera? But it seems that many are forgetting that sometimes the best is... More of the same?

Godzilla vs. Kong. The Sequel.

*IF* it would happen, what would you want to see? How do you think they'd pit these two against one another AGAIN. And how would it be resolved this time?

I think Godzilla & Kong should have separate films for now.

If Legendary/WB should go the "Destroy All Monsters" route, then they both absolutely should come back for that & fight side by side.
Top

This reminds me of the various times Toho movies had similar follow-ups proposed, like a "Godzilla vs King Ghidorah 2" after the 1991 film, or fittingly enough another King Kong vs Godzilla after the 1962 film. And some of them got made, like Terror of Mechagodzilla or Godzilla: Tokyo SOS.

Still, I don't usually like the idea of such follow-ups. Godzilla vs Kong concluded their battle pretty well. There's not much more story to tackle. Anything beyond that would leave one of the two deceased, which isn't necessary. Not opposed to them meeting again, but probably not as a central plot for the movie. If a Son of Kong-like film is made, having Baby Kong battle a dinosaur/dinosaur-esque monster would be the closest thing we need. Maybe have a Son of Kong battle a Rhedosaurus.
고질라

Be kind, for everyone you meet is fighting a hard battle. -Ian Maclaren
Top

I think a sequel to GVK should be swap the "Vs" out of the title and replace it with "and" to indicate that they're on the same side now. They should also toss in a subtitle to further help it differentiate.
Last edited by LegendZilla on Mon Jun 21, 2021 5:32 pm, edited 1 time in total.
Top

I don’t really think it’s necessary to have a rematch, since their battle already concluded in GvK, so why have a sequel when already they told us the answer to our questions

The Devil Will hear my song of the Damned
Top

Would kind of defeat the ending of the film tbh 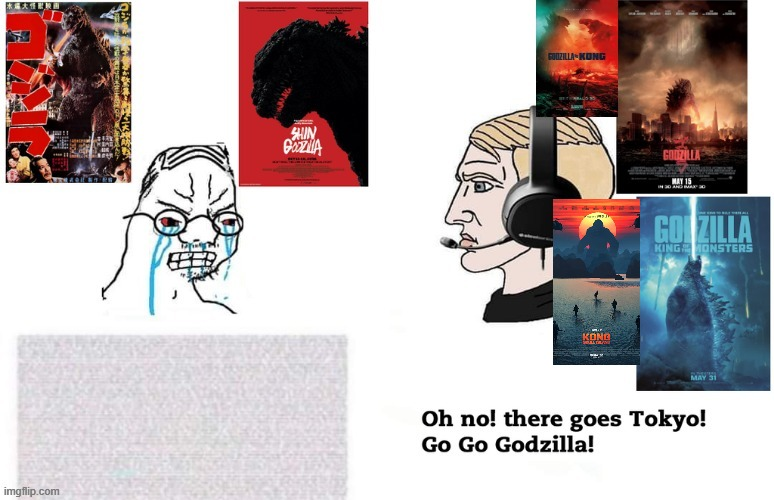 Doing an actual sequel to this movie (where Godzilla and Kong fight each other) now or anytime soon would be a colossal mistake. It would make the events of GvK practically irrelevant and it would be seen as incredibly repetitive to a wide audience. Now hypothetically, if the Monsterverse continued for quite a while, with a lot more films, I'm sure you could create an interesting storyline to set up Godzilla and Kong again and have it be anticipated later on. But then again we are talking about the types of writers Legendary hires so uh.........I wouldn't count on that.
Last edited by Moogabunga on Mon Jun 21, 2021 6:52 pm, edited 1 time in total.
Top

Nay. I want to see Godzilla and Kong have a buddy cop adventure trying to stop a new monster that threatens the surface and hollow earth. I think that opens the gates towards some fun dynamics.
Reignited... and hopefully less weird this time around.

If Legendary/WB should go the "Destroy All Monsters" route, then they both absolutely should come back for that & fight side by side.

Basically this. I have no interest in another rematch right away, but I'd be all for another type of co-star situation.
"Stop wars and no more accidents. I guess that's all I can ask." -Akio
Top

If Legendary/WB should go the "Destroy All Monsters" route, then they both absolutely should come back for that & fight side by side.

Basically this. I have no interest in another rematch right away, but I'd be all for another type of co-star situation.

Ditto on this. I don't understand what we'd get more out of a second round. We got all the info we'd need to know: Kong is doomed at sea. Kong does better in city/environments where he can climb and will use tools, etc...

Godzilla vs. Kong is actually one of the more satisfying vs films in a while in showing what prospective powers both of the titular monsters would use, and giving them both enough information.

Rodan95 wrote:The Shobijin are sat on by a fatass explorer and killed. Mothra is pissed and destroys Japan.

If Godzilla and Kong did fight again I had an idea that it could be over a Baby Godzilla. Imagine this: Kong finds and adopts a baby Godzilla in the Hollow Earth. Godzilla ventures down there sensing another of his kind. Godzilla arrives and demands Kong hand over the kid but he refuses. They fight but its more of a wrestle and not a death match. Godzilla doesn't use his atomic breath, Kong doesn't use his axe and basically neither is trying to kill the other anymore. A more tame version of the Hong Kong fight. I'd have Godzilla win again, though he might come off as a kidnapper in a scenario like this haha. I also think if there was a movie in the Monsterverse to have no humans in it it should be this one. Just make it a really short fight over a very low stakes motive.
Top

The only reason I'd like to see them fight again would be part of a wider film. Not a needless rematch sequel.

My thought? Do a Destroy All Monsters movie with all the monsters, aliens mind control Godzilla, and then Kong has to fight him while the humans try to free him.

That, or Fake Godzilla/Mechagodzilla 2 because I'm so skreeonking pissed they skipped that godtier idea

They could talk to each other?

I'd love to see a massive, multi-monster free-for-all battle if we get a DAM-type film; maybe Godzilla and Kong could have a rematch of sorts in the course of that battle, though they'd probably get sidetracked by the other monsters before a winner could be decided.
"Stop wars and no more accidents. I guess that's all I can ask." -Akio
Top

I want to see them meet each other again, but I guess what i would want to see is something like Kong finding and waking up a monster at the center of the heart and after loosing to it with charged axe and all, going back to the surface to call for Godzilla's help, then we got the buddy cop movie of them two interacting together on the chase for this creature, we get funny moments as the more human gorilla interacts and tries to sort of befriend the kotm, godzilla maybe softening a bit towards him (guess the monke is not so annoying).
Top

I would like to see them together again, but for another versus movie? Nah. I want to see them team-up for the whole movie.
"You are the Arbiter. The will of the Prophets. But these are my Elites. Their lives matter to me. Yours does not."

I think it'd be funny as skreeonk if Kong goes to get Godzilla's attention at some point in a DAM situation, Godzilla turns around aggressively with glowing green eyes (alien mind control), and they do one of those KOTM zoom-in shots on Kong looking absolutely scared shitless. He knows Godzilla held back last time, so now Kong has to think on his feet, axeless.

Added in 1 minute 36 seconds:
I also think it'd be interesting since, while we're all predicting Ghidorah or some other big bad for their next DAM event film, it might just be Godzilla himself, the Natural Balancer. (If they choose to go that route)

If is was more of a cooperative team up between Godzilla and Kong sure. However we just had Godzilla vs Kong and it was very conclusive so I not only think doing a repeat is pointless it is also more than redundant.
Top

A sequel that heavily features Kong is the only real route to go. This films proves the GA wants Godzilla AND Kong. Anything else would feel like a step down. A Destroy All Monsters type film is the smartest move.
Rocker, paleo buff, cryptid enthusiast, Dragonball fanatic, and lover of comic book, video game, manga, & anime babes!
Follow me on Twitter, if you dare! https://twitter.com/TLK_1983