IDW’s Godzilla: Rage Across Time is an anthology series that depicts a Godzilla more akin to the MV Godzilla in terms of origin and history, where instead of being a mutant or a more docile creature turned aggressive due to pain from the atomic bomb, he is instead an ancient being who’s impact on history is varied and noteworthy. However, this Godzilla is no benevolent guardian of nature… 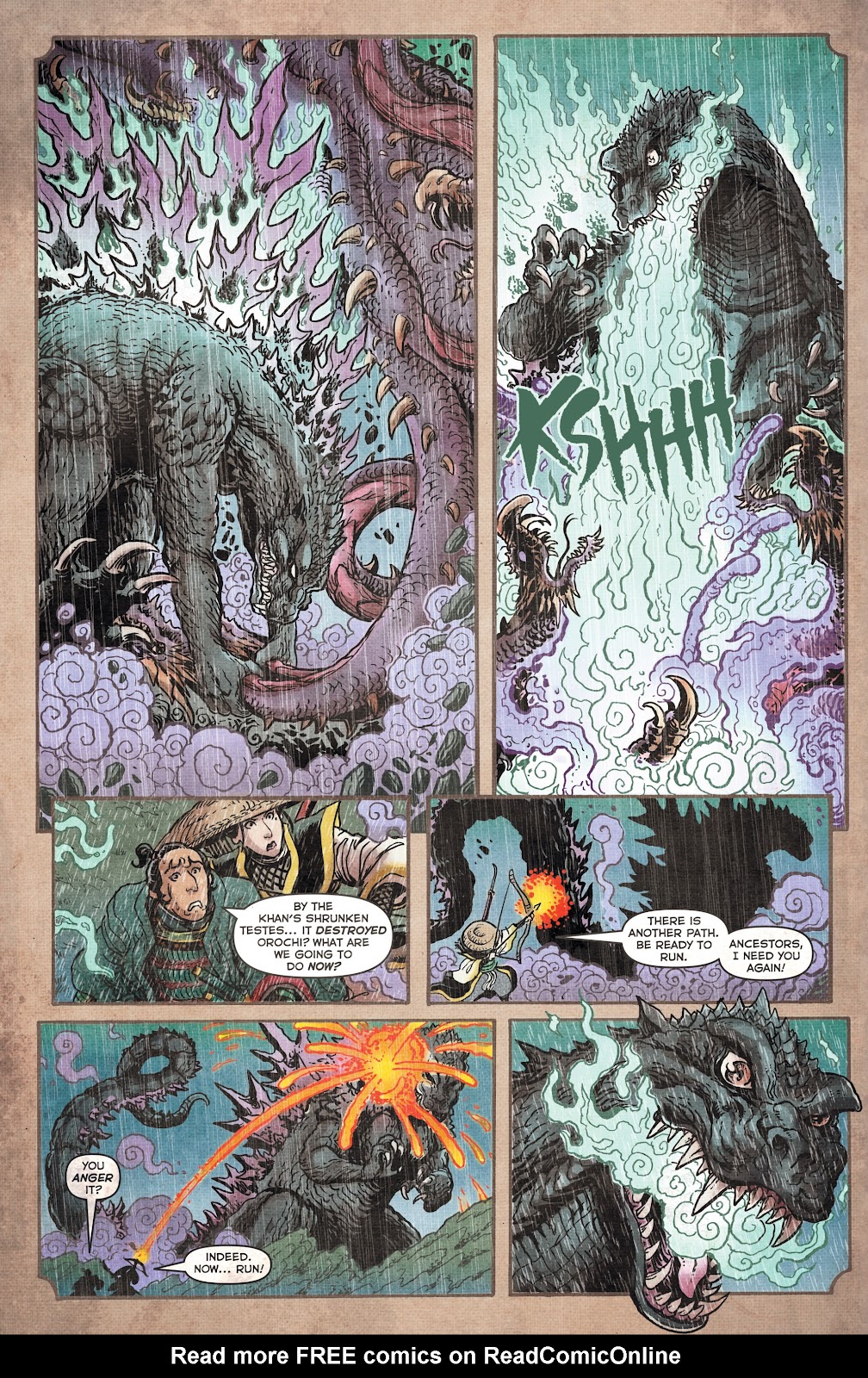 Godzilla is able to flip Spirit Orochi over his head with ease, a monster seemingly larger than him at least in terms of length. He’s also later shown to be capable of casually swinging Showa Gigan around and knocking him around with his tail. 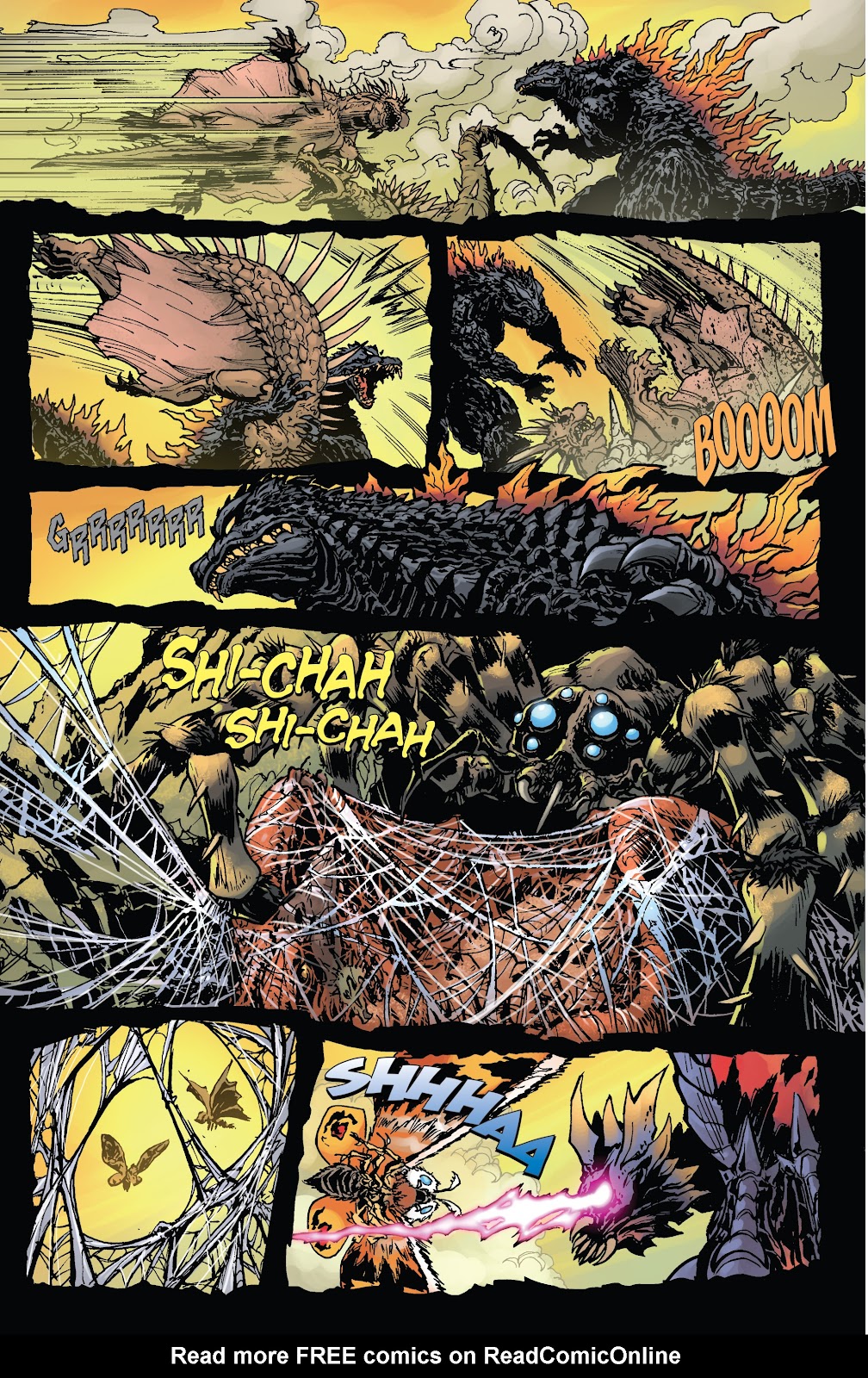 Intercepts a flying Varan and flips him over his shoulder, also an impressive display of speed given how he was able to catch Varan. 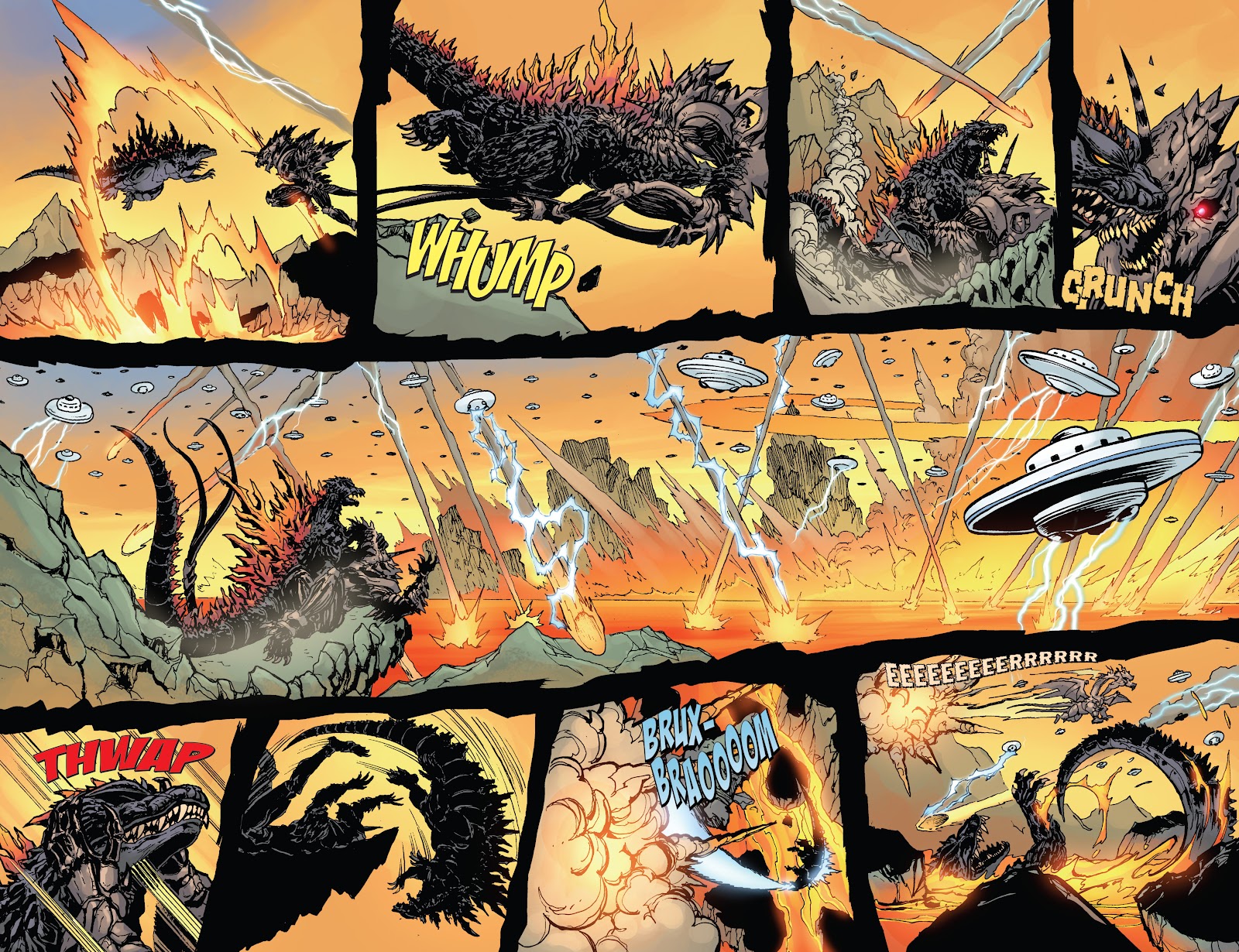 Overpowers Monster X when they leap at one another, then snaps one of the two horns atop his head with a bite. Monster X had just smacked Anguirus away like a ragdoll a solid distance. 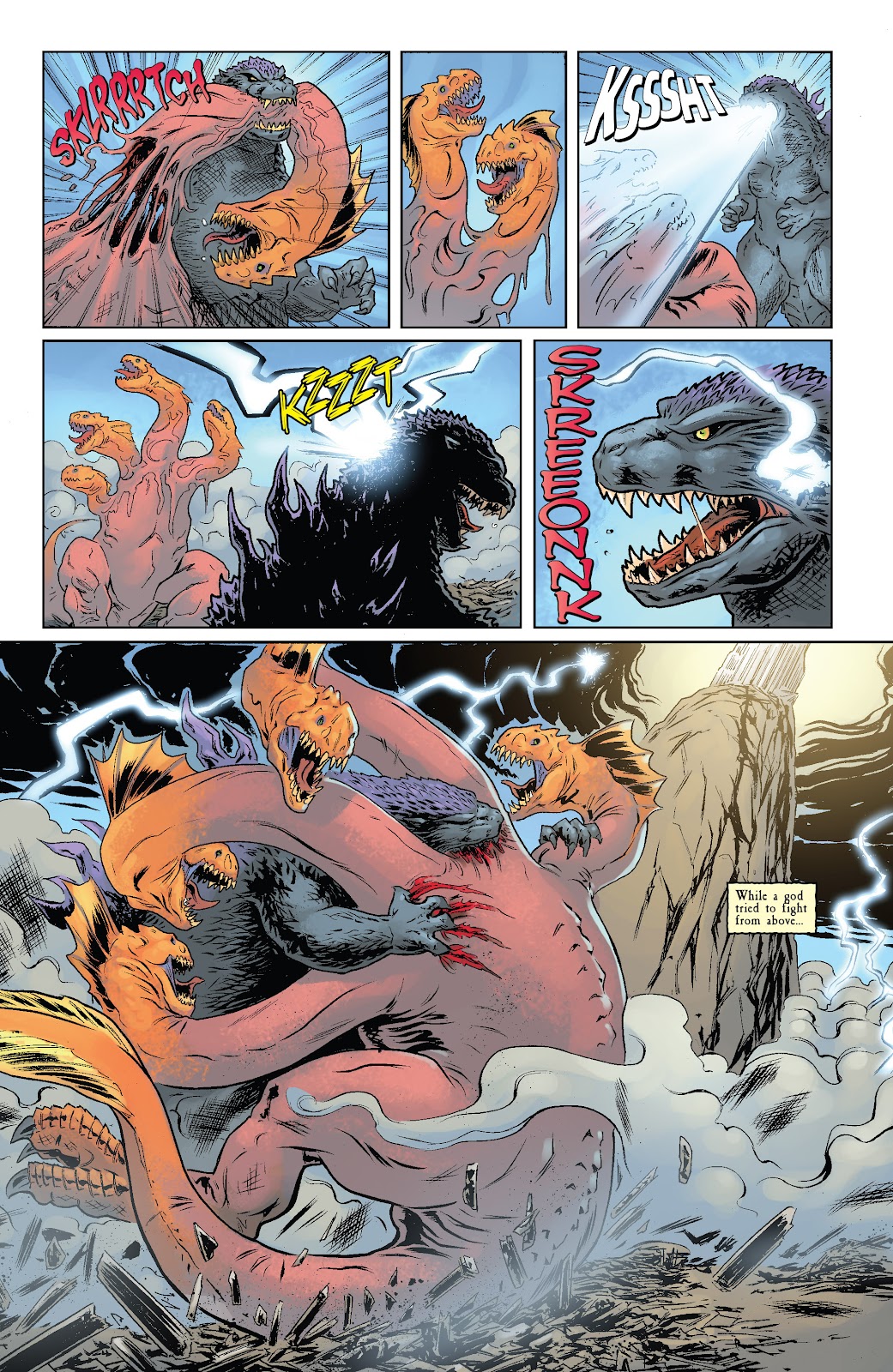 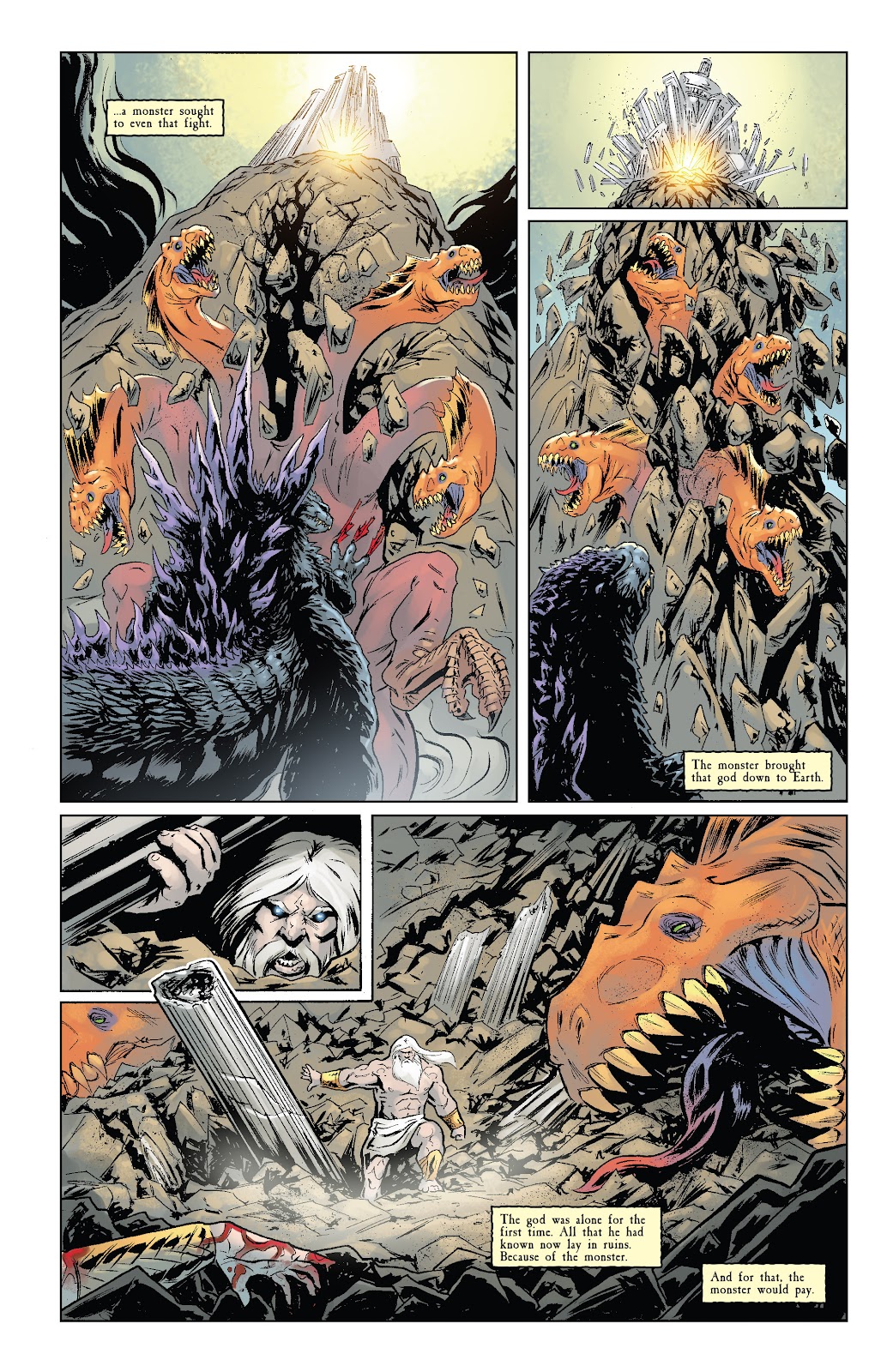 Perhaps the best feat of strength this version of Godzilla has, easily pulls the head off of the Hydra of Greek Mythology, then proceeds to body slam it through Mt. Olympus (though perhaps not an exact representation of the real world Olympus, still clearly massively taller than either of them) hard enough to shatter it.

Godzilla is unaffected by Spirit Orochi biting him, even on the neck. 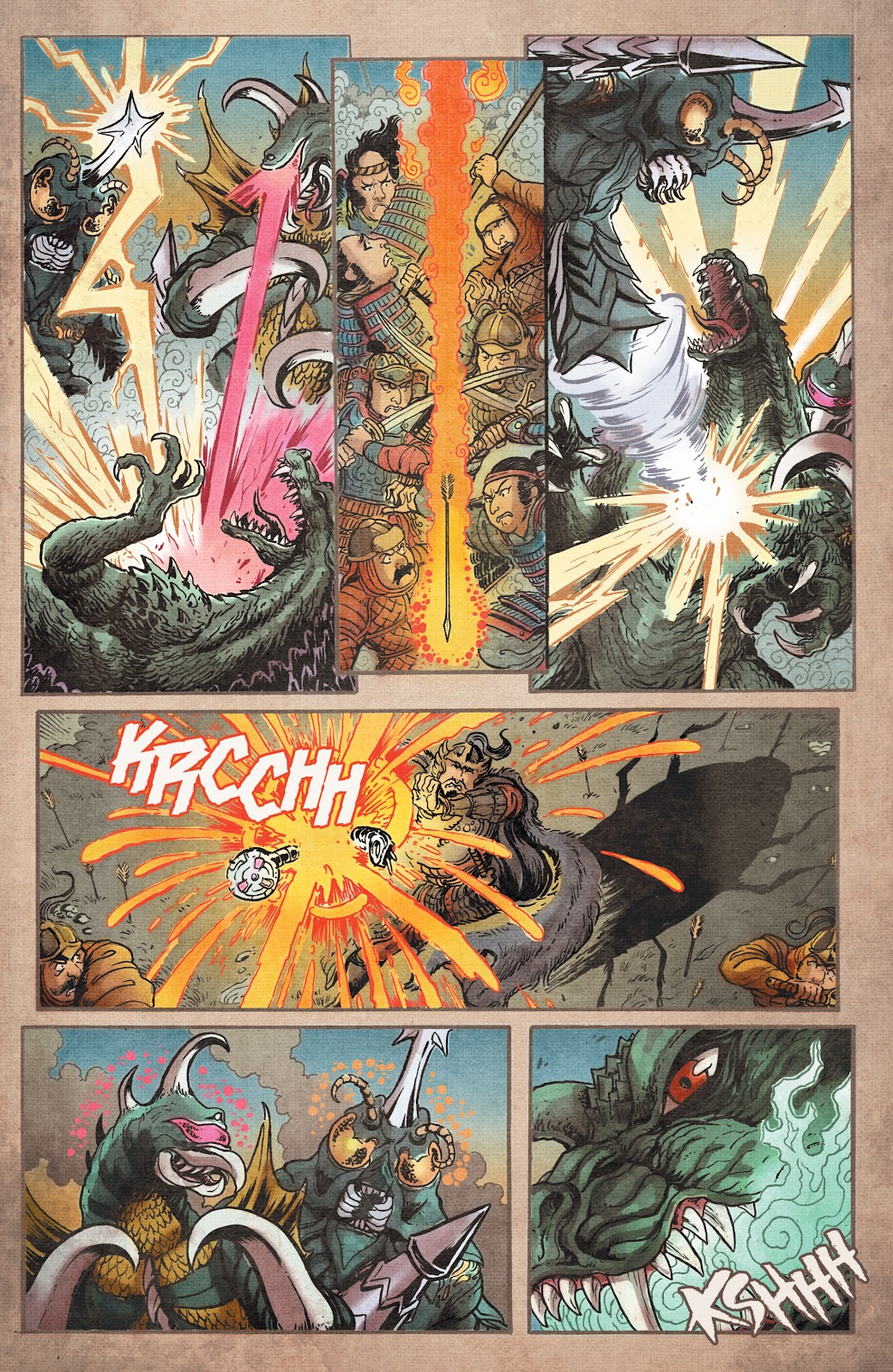 Able to withstand Gigan and Megalon’s beams on his chest at once, then withstands Megalon’s drill spinning into his chest. Neither attack seems to have actually left a mark on his body.

RAT Godzilla was struck by a tsunami made by Posiedon that was taller than him, and just rode the wave into Greece completely unaffected. 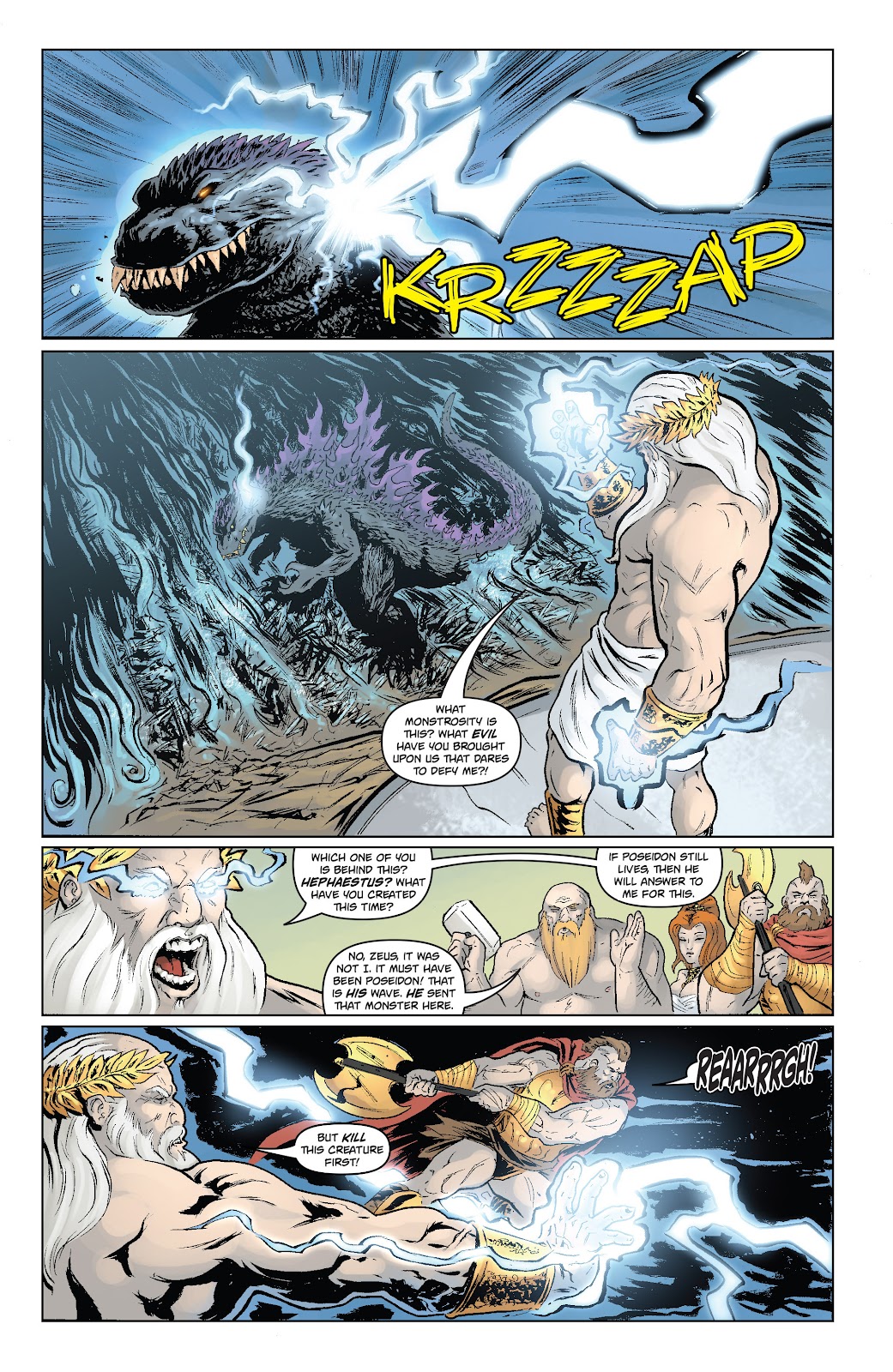 Shrugs off a lightning bolt to the face from Zeus. 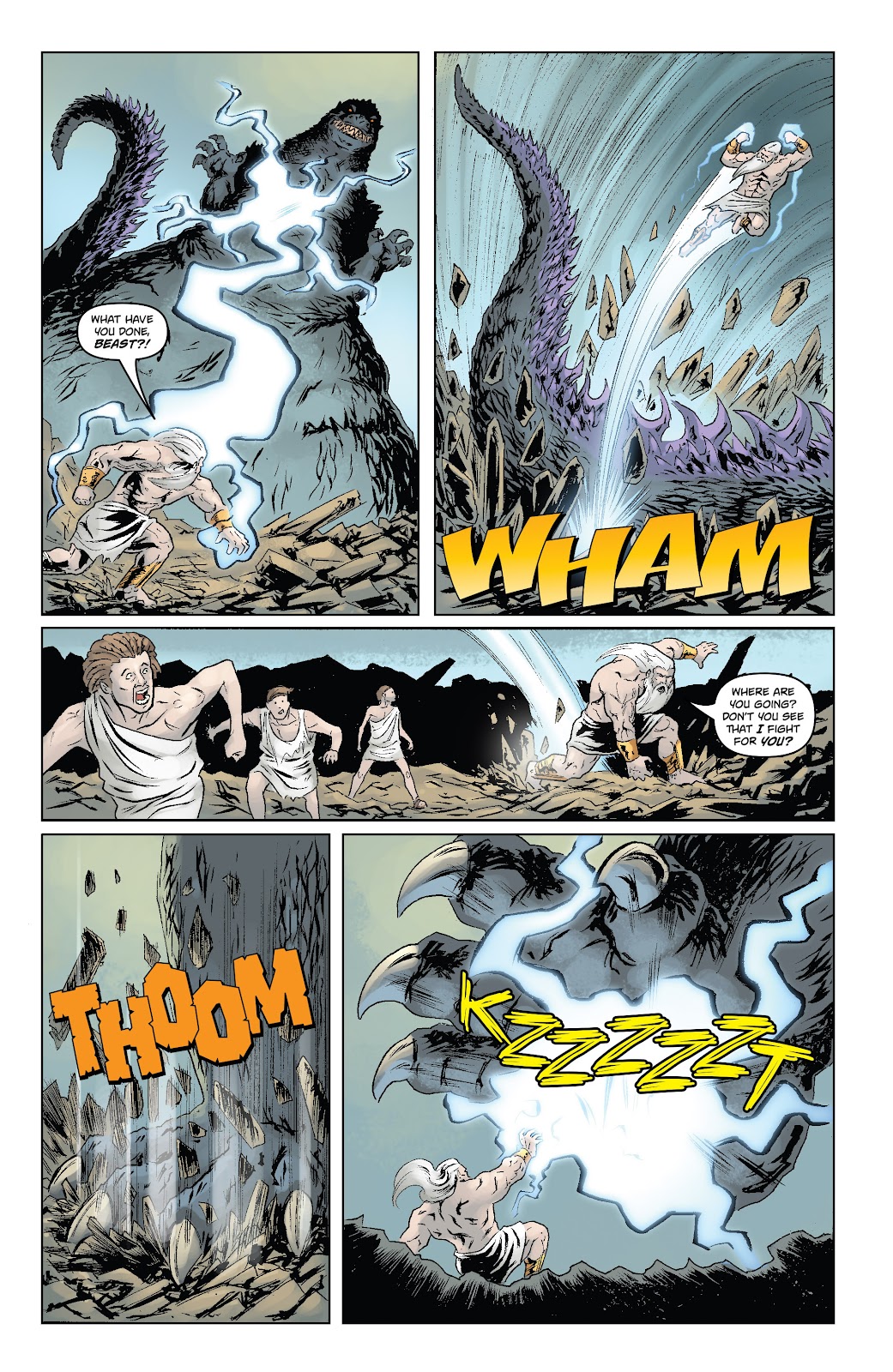 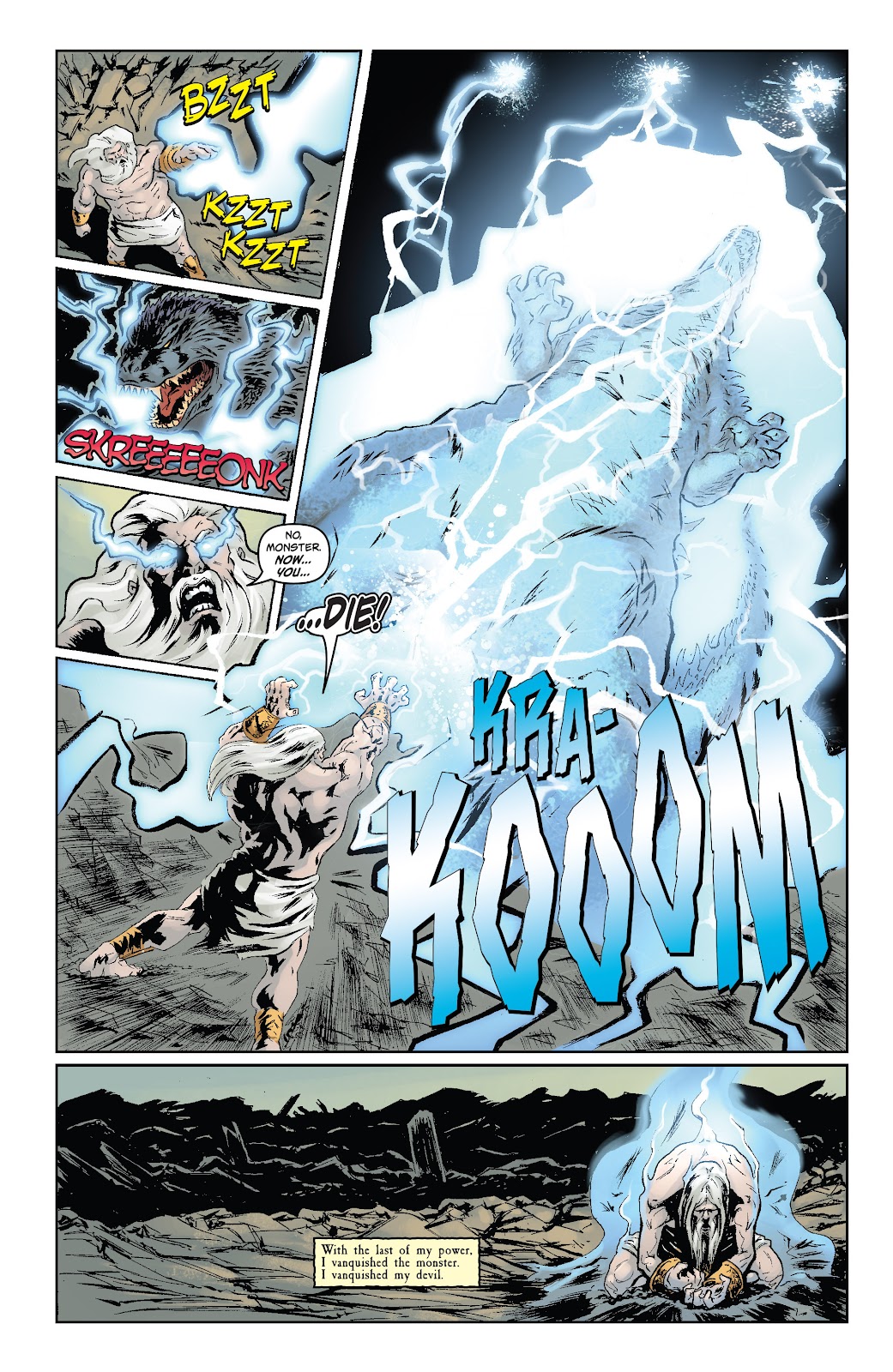 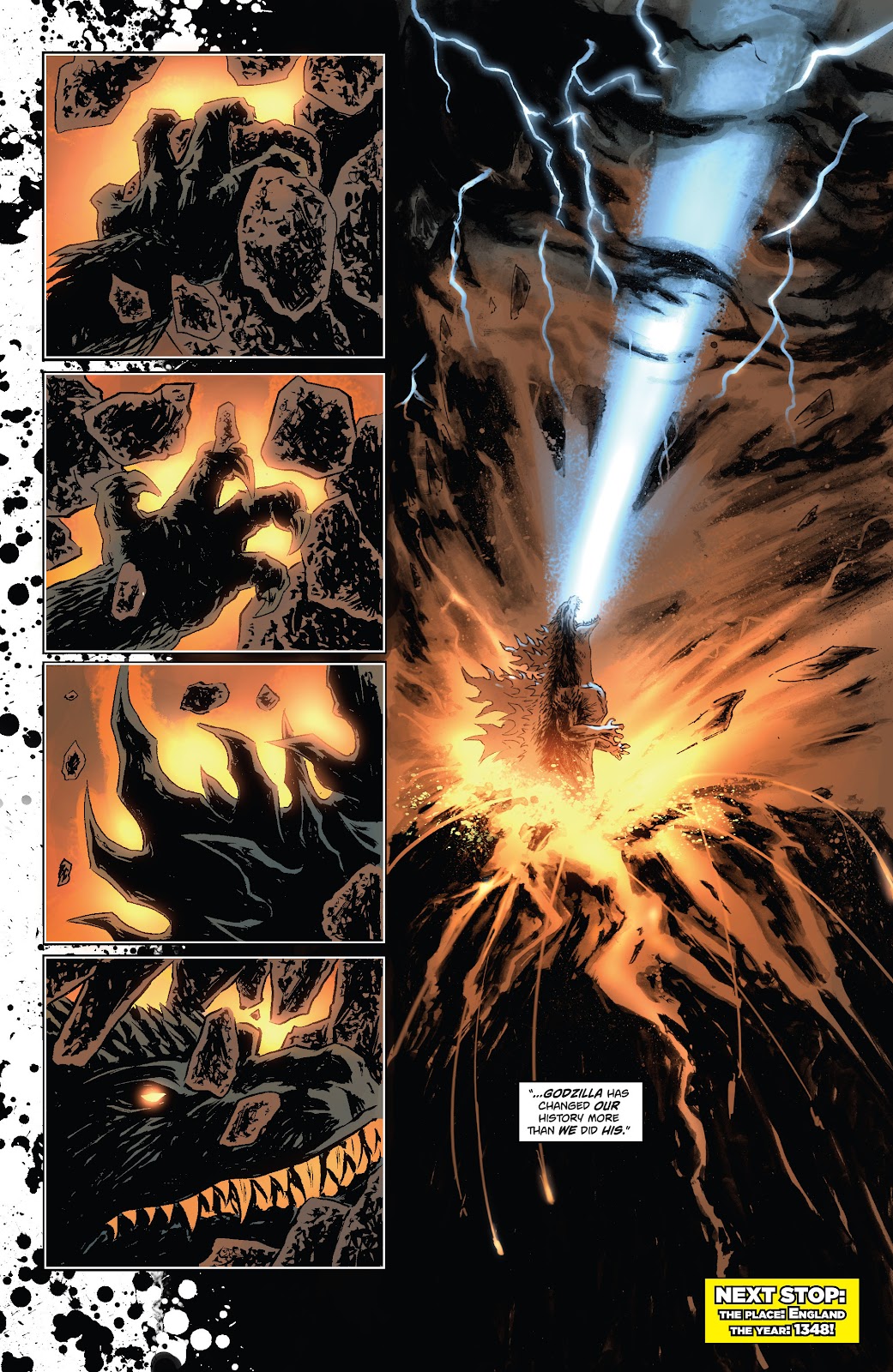 Godzilla continues to shrug off the attacks of Zeus, until Zeus uses every ounce of his power to call down a bolt of lightning so massive that it completely envelops Godzilla. However, this does not actually kill Godzilla as he assumes, seemingly having actually just drove him very deeply underground (it does look like there’s a giant hole behind Zeus in the last panel of that page). Godzilla survived, and later returned, emerging from Mt. Vesuvius and initiating the destruction of Pompeii.

This would have to be around a hundred years between Godzilla’s defeat and his return, so this is about the limit of his durability. 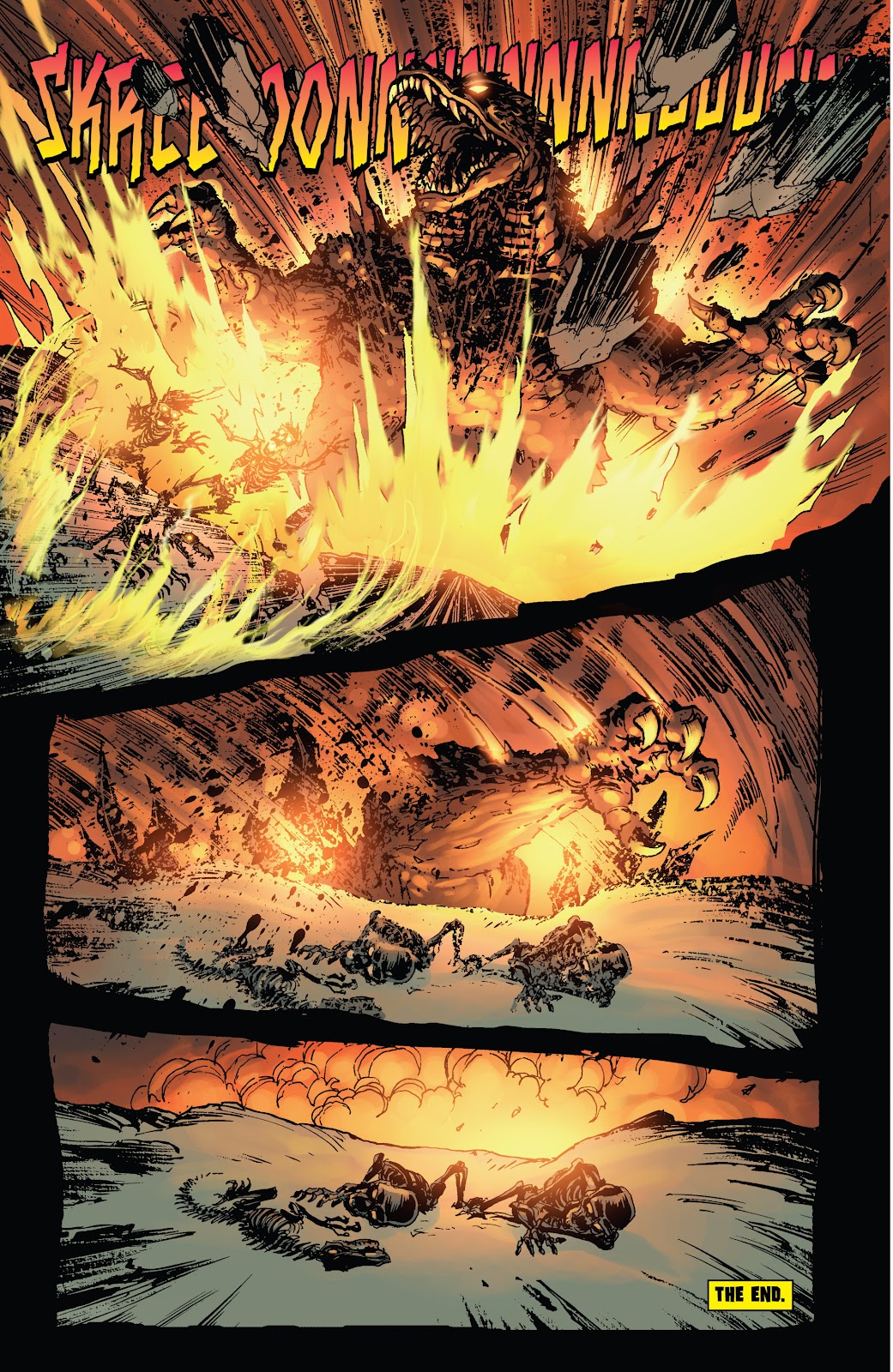 Godzilla handles being thrown into lava well, escaping minutes afterwards by bursting up from the ground.

This version of Godzilla does seem to display some healing factor, shedding blood when bitten by the Hydra on the arm yet having no marks on his arm the next time we see it. 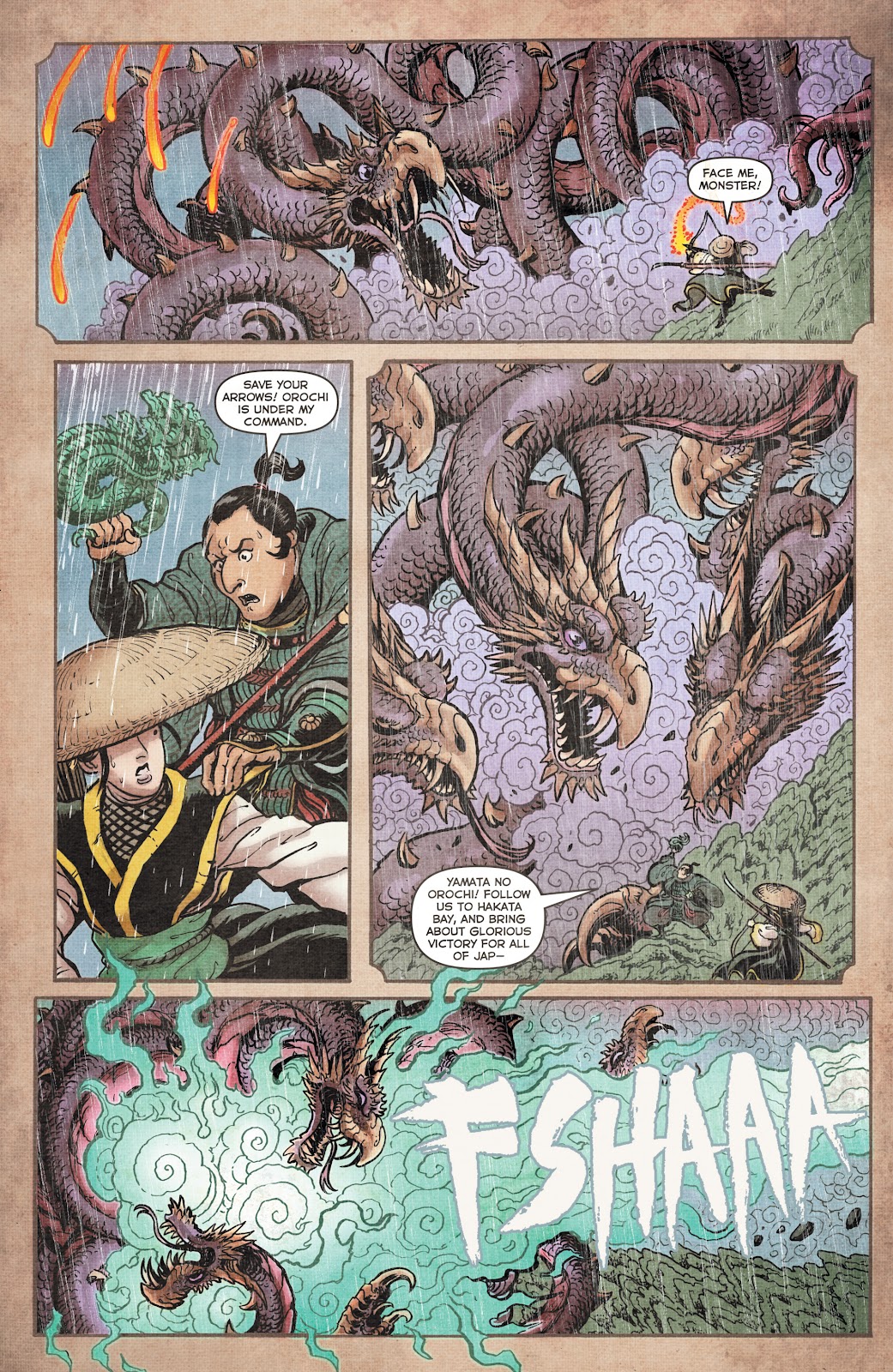 Two shots of the Atomic Ray (and a slam against the ground) killed Spirit Orochi, whom was claimed to be capable of driving Gigan and Megalon away. 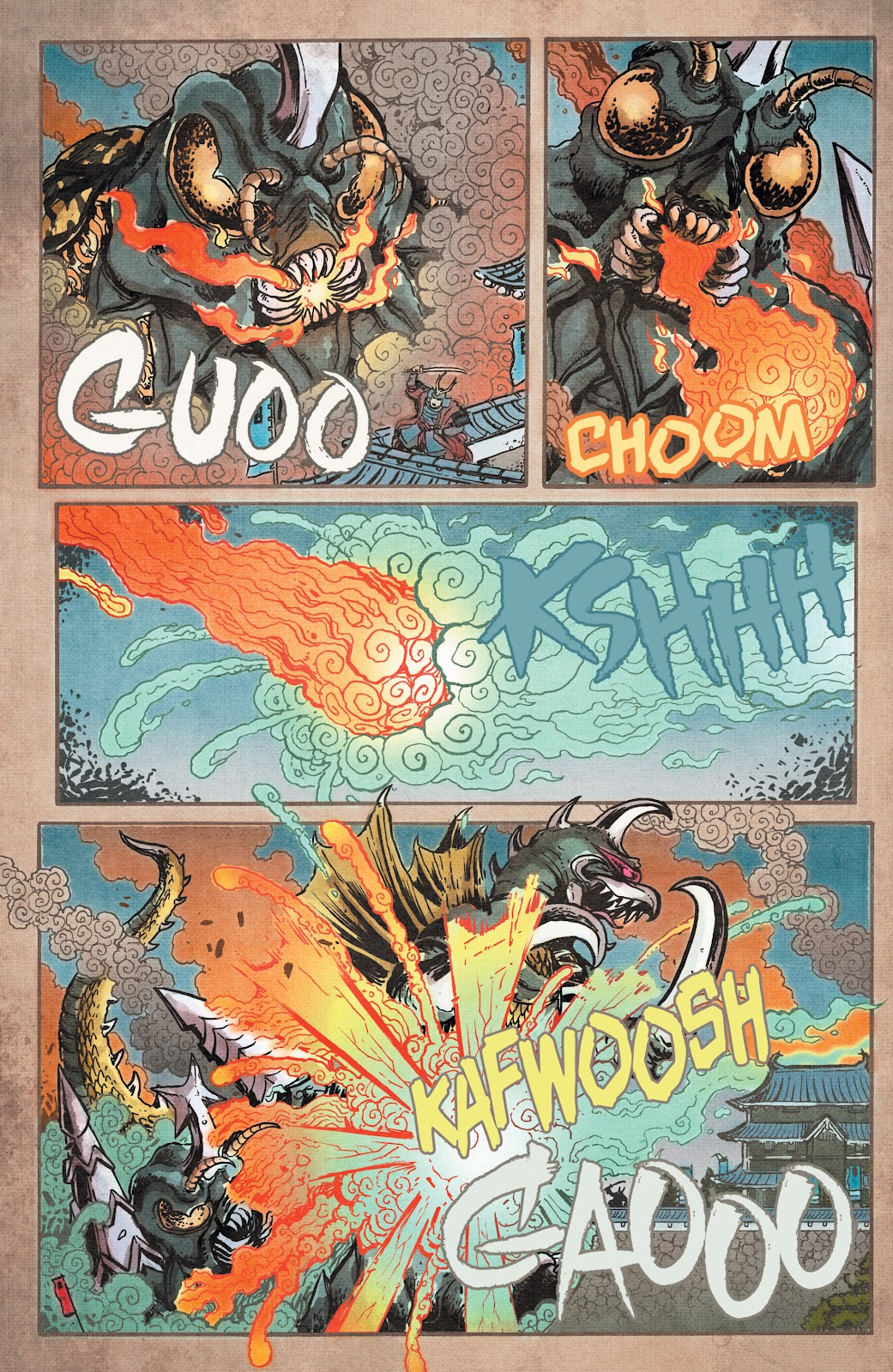 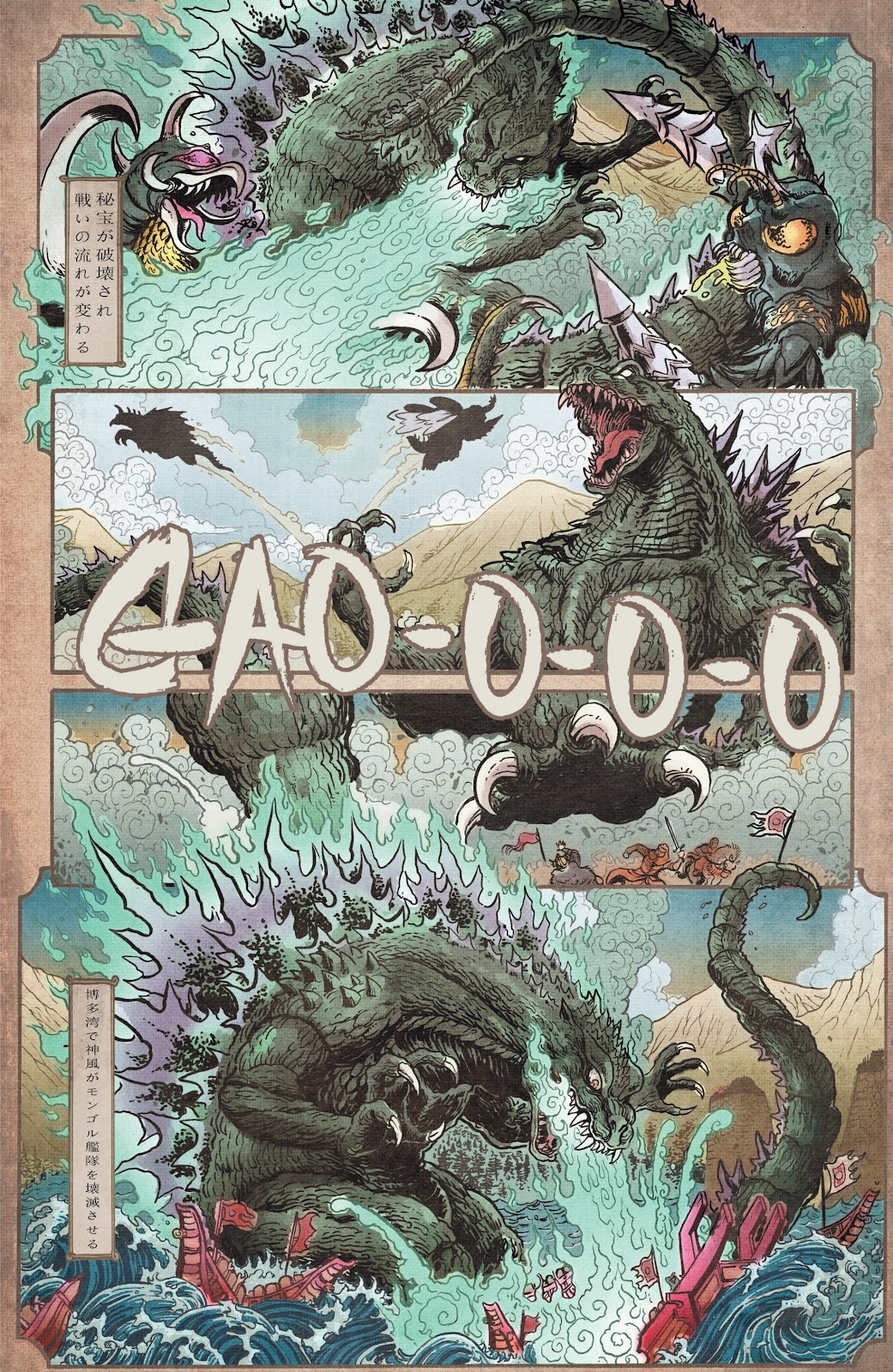 Intercepts Megalon’s napalm bomb, causing an explosion that harms both Gigan and Megalon. After a brief battle, a second shot of it sends both fleeing. 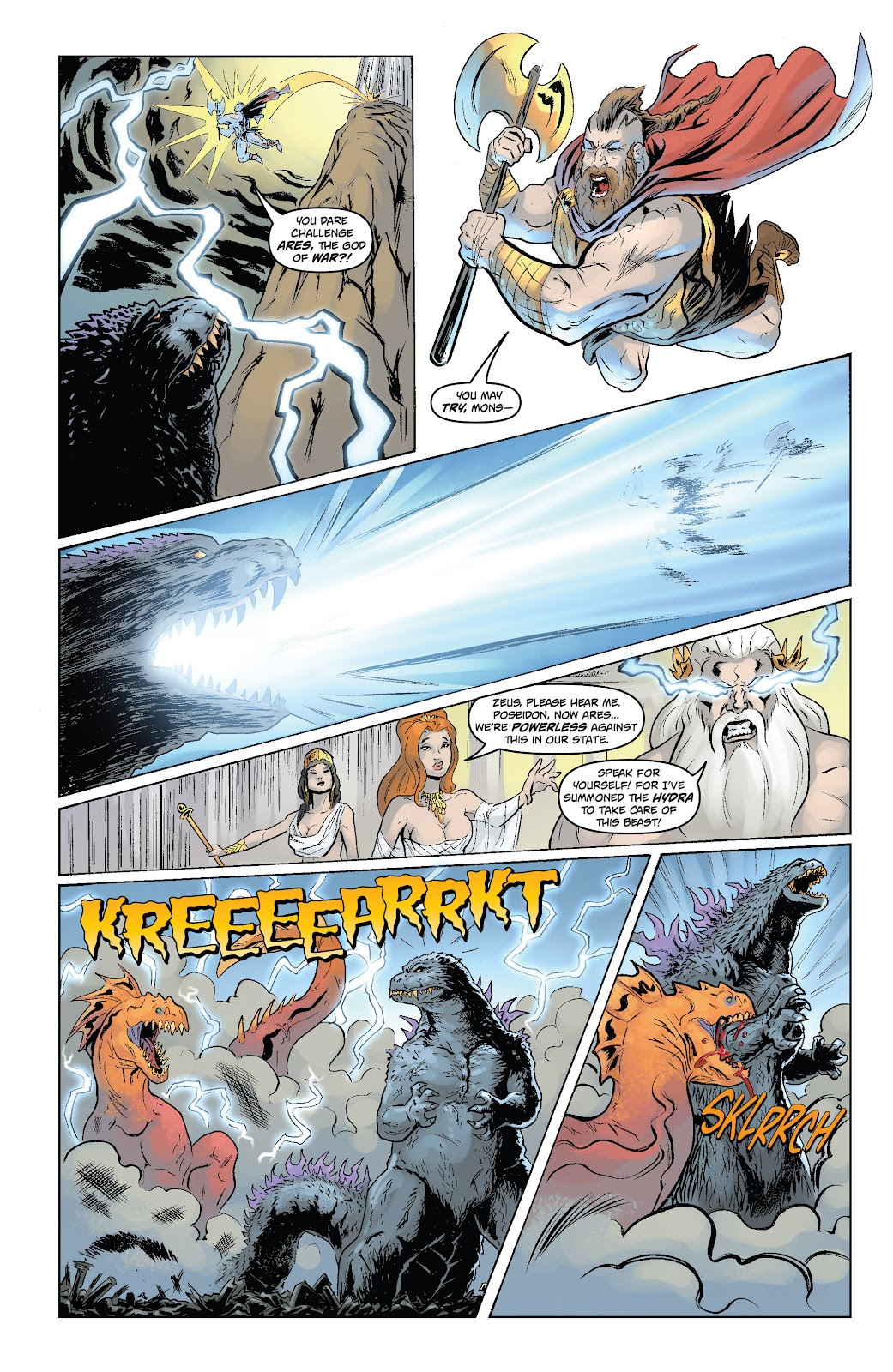 Incinerates Ares, the Greek god of war, in one shot. Zeus, who Ares should be somewhat comparable to, survived Mt. Olympus’ collapse unharmed. 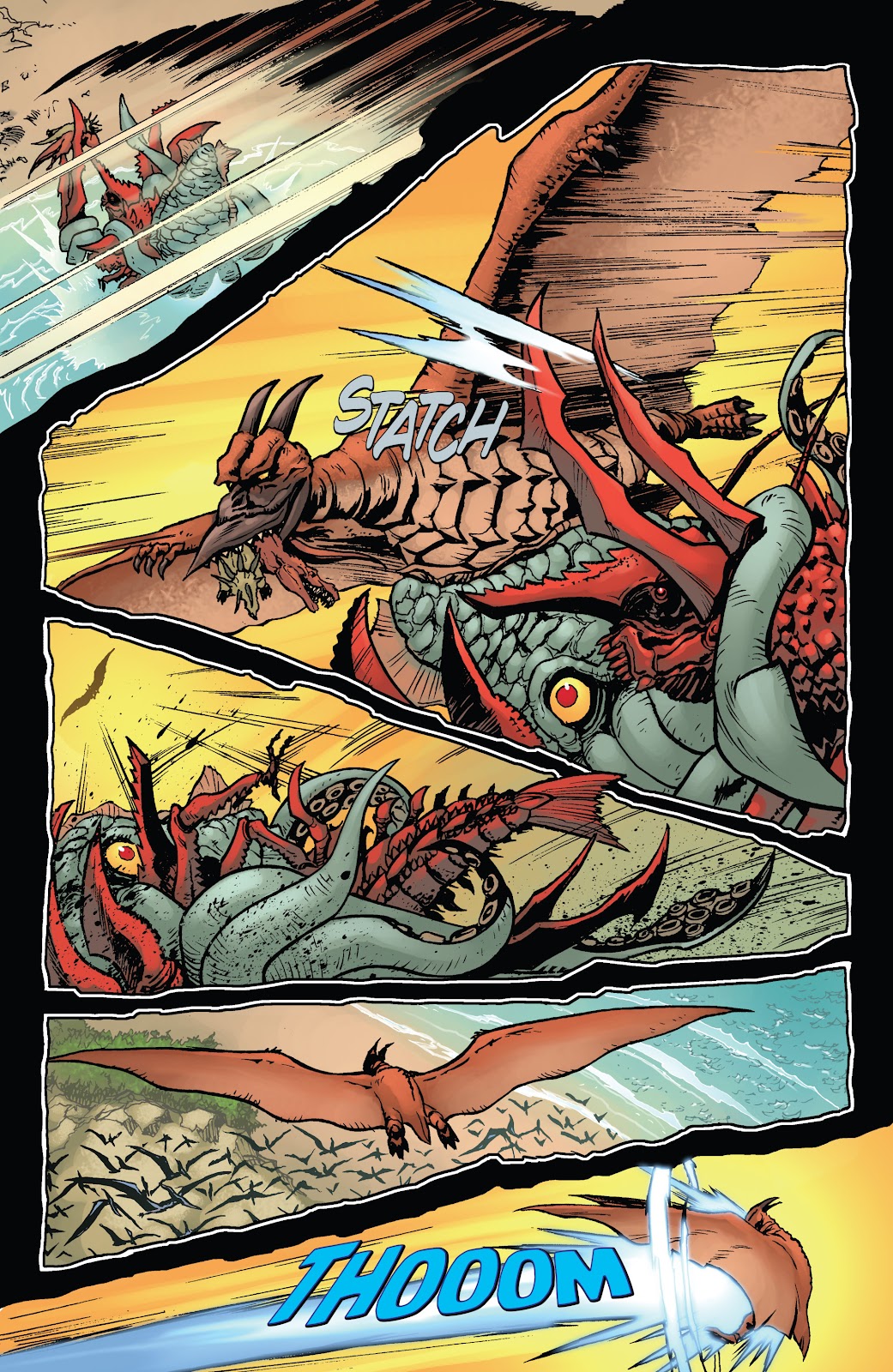 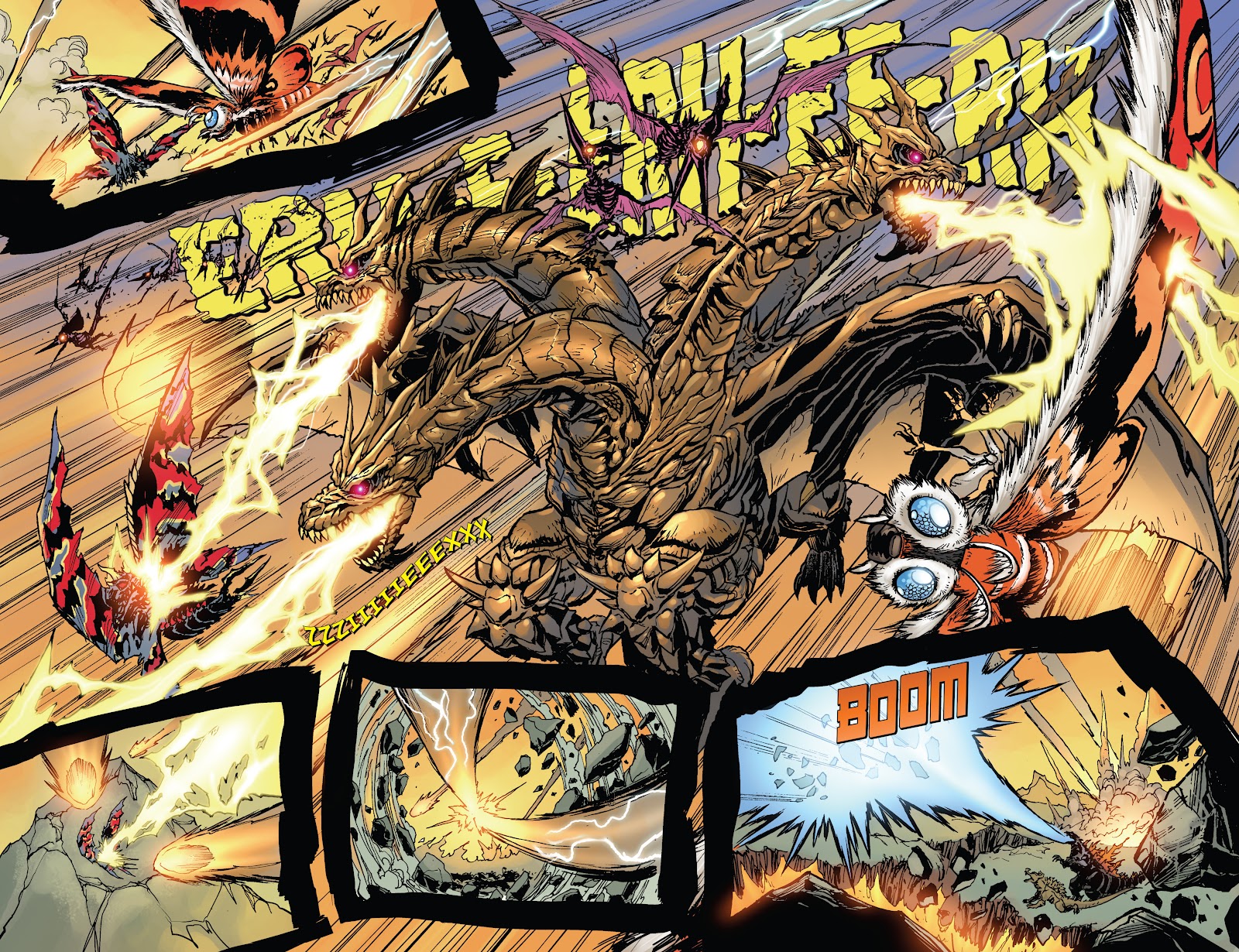 Launches Rodan back, and later destroys a meteor that appears to be of at least similar size to Godzilla.

), Rage Across Time Godzilla is still a formidable foe that earns his spot as a historic monster.
Second in Command & Primary Verifier of the KWCE

Re: Respect Godzilla (Rage Across Time)

I dunno man, RAT Godzilla seems to be insanely more powerful than the IDW trilogy Godzilla going off of some of these feats. I may need to re-read your IDW Godzilla thread though. I'm really interested in the Godzilla in Hell thread. I may do one for the Dark Horse Godzilla if I can find a place to read all the comics.