For the discussion of all fantasy matches, Toho or otherwise. To post, you must join the FM Usergroup.
Post Reply
3 posts • Page 1 of 1

Yes, another Kong vs T-Rex fight but hear me out. Both of these guys have beaten off three other Rexes simultaneously while protecting a smaller creature. Also it’s a kickboxing dinosaur.

Stats for Heart as best as I can figure right now.
Height: As tall as an upright Maiasaurus.
Weight: Unknown (It’s an anime dinosaur)
Abilities: Sharp Teeth and claws, Self Taught Kickboxing, Runs Fast enough to run on cliff faces, trains his body constantly, Headbutt able to smash rocks.

Location: Skull Island (Monsterverse Version)
Rules: Heart is scaled to a V-Rex as otherwise Heart would be instantly grabbed and smushed in Kongs fist due to being the size of a Maiasaurus.
Fight to the Death.

A video of Heart in Action. (The larger rex is an adult by the way)

Verdict: This can go either way. Kong is a battle hardened ape capable of warding off three V-Rexes to protect a human in one hand. Heart was capable of fighting off three to four other big jaws of the same size as him and beat them all to protect his small adopted ankylosaur son, then went on to nearly beat his biological father a while later. If Kong can get a good grasp onto Heart, he could very well snap his jaws if he doesn’t get repeatedly kicked to the chest. I’m leaning a bit more towards Heart than Kong as he actually trains his body constantly to better run and kick ass, meaning he could probably kick the poop out of Kong before he gets grabbed.
Last edited by Nagoda on Sun Oct 10, 2021 10:10 am, edited 1 time in total.
A reminder to watch Chouseishin Gransazers.

Heart is more agile I'd say, and more than strong and durable enough to contend with Kong. This feels like it could go either way, considering how capable both of them are in melee.
My most wanted fight ever is Discord vs Bobobo-bo bo-bobo.

Not seeing how Kong doesn't get his dick kicked out through his esophagus.

The dino straight up side steps faster than he can run, and he can leap like a frog while being happy to run up and down walls like a ninja. To say that he could dance around Kong would be a grand understatement. He's not going to have any difficult whatsoever dodging any unwanted hits and retaliating. Just look at how he contested multiple legitimately fast, strong, and competent opponents at once. And that says nothing of how he danced around that much larger therapod, Kong wouldn't have a prayer against a dinosaur who outsizes him so much, Heart fought it head on an matched the beast. His speed and agility is on another level.

And so is his strength. Kong killed a V-Rex(an explicitly more durable foe) by slamming a big rock on him. Meanwhile the dino he's facing casually runs his face through boulders bigger than he is and shatters them as a training routine. Smashing through trees and other environmental obstructions while hardly noticing. Hell, the fact that he contested that much larger dinosaur's jaws with his legs says some pretty horrifying things about his over all physical strength. And that's kept consistent with how he casually sends opponents his size flying with strikes. Kong can't say the same, not anywhere close.

Honestly I would solidly bet on Heart winning with his normal size. And yet he's been sized up to outmass Kong well over twice over.

So you've taken this:

And made him as big as one of these: 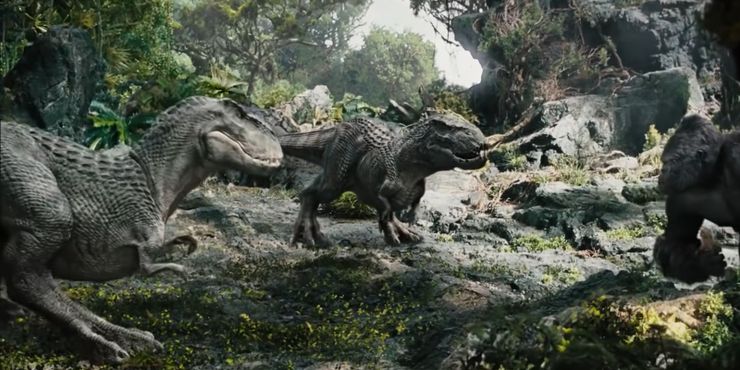 To call this a fight would be a misuse of the term, more like one sided slaughter. 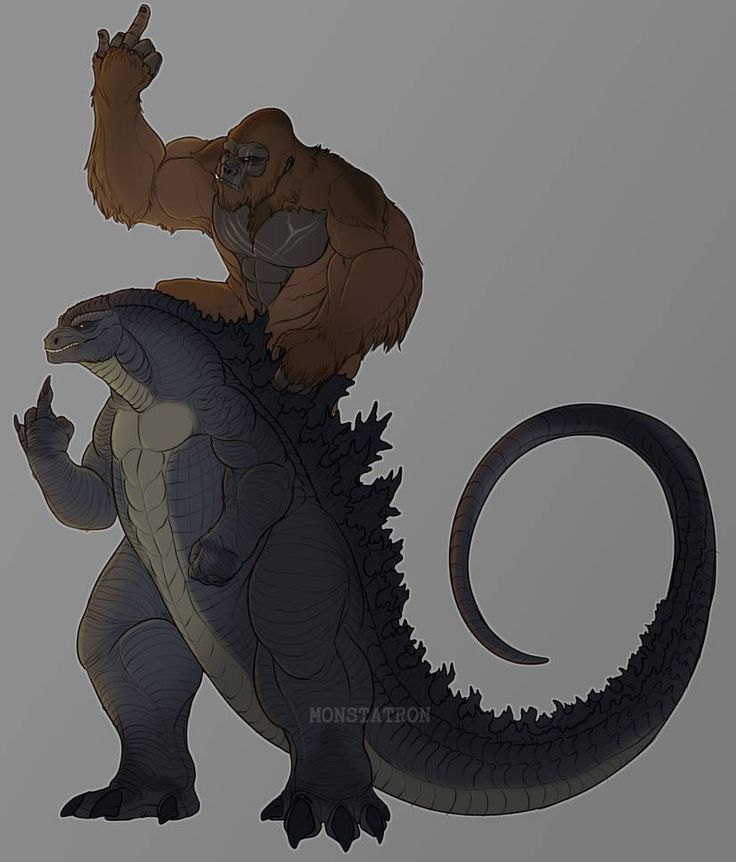