For the discussion of Toho toys, models, figures and other collectibles of this nature.
Post Reply
1526 posts

Platypus Prime wrote: ↑Mon Aug 22, 2022 4:45 pm Given that I just got a winged mini-gorilla called "Wing Kong" in the mail from them, along with figures of a glow-in-the-dark Jet Jaguar and Alfred Hitchcock, I don't think 'insane' is that unlikely.

That's a hell of a display you're making there

Brian Flynn just did an interview with Entertainment Earth, and while there isn't anything that pertains specifically to Godzilla, he provides some great insight into their approach to making product:

We never went into projects at that time assuming we were gonna make money. We went in with the goal to break even. So, if it costs me, and I'm gonna use round numbers here, $10,000 to make em, and I was selling figures for $10 each, I needed to sell 1000 figures, that was my goal. If I sold 1000 figures and we broke even, I got the toy for free! Like, we won! Even if I got another 1000 in the basement, who cares? I got the toy for free. If you told me I was gonna lose $100, $200, but I could make the toy I wanted in plastic for real? I'd sign up for that all day. So, you know, we never really thought about how many other people there were, it was really like, how do we make this thing exist? I just wanna get it out there and if other people like it, great, but if they don't, I got it.

On the topic of creating niche product

What we've found is that stuff that's even further down is actually often times better than the sort of one level down, because nothing has been done. So when you make it, people are like 'finally! Somebody!'

Fermix, out of morbid curiosity, I went through your post history over the past few months. Do you work for Super 7 or are getting paid to post about the Super 7 toys?

Legion1979 wrote: ↑Tue Aug 23, 2022 8:53 am Fermix, out of morbid curiosity, I went through your post history over the past few months. Do you work for Super 7 or are getting paid to post about the Super 7 toys?

Nah I'm just excited about them picking up the license. I don't collect much other merchandise because it's usually out of my budget as a new homeowner in the Toronto market, and I generally don't have much to say about kaiju media that hasn't already been said. I didn't know too much about Super7 prior to them acquiring the license so it has been fun to learn about the company and the people. It's nice to have something affordable to look forward to!

All I can say is it’s a weird thing to look back and remember when they were just an online store in San Francisco where I ordered a bunch of Marusan figures from. They’ve come a long way.
Top

I made a mock-up of what a Shogun blind box assortment could look like, since Brian has spoken a few times about how well the mold has been doing. 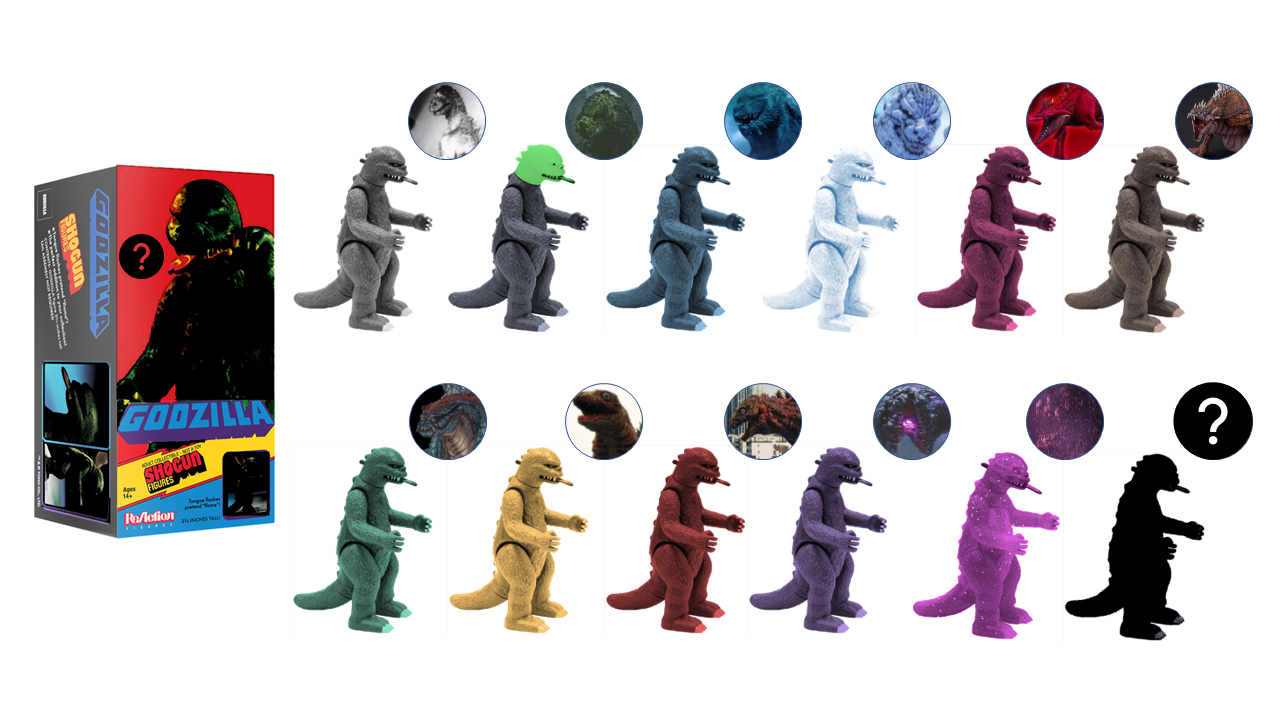 If they were to do something like this, I hope they would go the same route that Funko took in their early Mystery Minis days where purchasing a whole case would guarantee you one of each version to reduce customer frustration. Would you guys be interested in a product like this?
Top

That’s a really neat mock-up! I don’t like the Shogun figure, so I wouldn’t pick it up, but if they did that with one of their original Godzilla molds, I might.
Last edited by KingCornetto on Tue Sep 13, 2022 1:57 pm, edited 1 time in total.
Top

I checked out the reviews for MonsterArts Mechagodzilla and Garuda and I've reconsidered skipping the Super7 one because even at $85, it's the cheapest way to get them in a poseable format and even if they reissue the Monsterarts at a more reasonable cost, it would not scale with my Music Box Godzilla. I also hadn't realized that the MonsterArts one did the flying head and chest beam by parts-swapping too. I do wish Super7 articulated the jaw, though, vs. an extra head you have to pop a joint to swap.
Last edited by Platypus Prime on Thu Sep 15, 2022 5:35 pm, edited 1 time in total.
Top

Anyone who has Wing Kong able to post a pic next to ReAction Godzilla?
Top 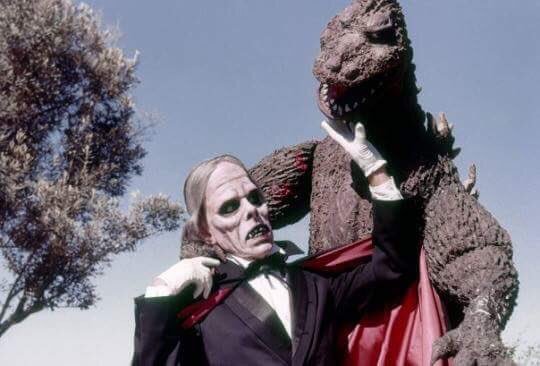 Can anyone give me some backstory for why Godzilla is trying to smooch the Phantom of the Opera's neck?

Best of my knowledge. If someone knows more, I'd be happy to hear it.

I knew someone had that article, I couldn't find it. Later to the party, but cliff notes version. Basically, someone visited someone who had connections to Toho, iirc a wife? Going through some old pictures and found this and like 1/2 others. Legit by a stroke of sheer chance and luck someone had these for their personal collection thinking absolutely nothing of it, because they had no idea it was from a lost film until they were informed. Makes you wonder what else is still floating out there.

Recently picked up a near complete set including the glow in the darks. I was talking with MM years ago about a reactions line for Godzilla and how they should base it off the Trendmasters. At the time it was a pipedream. Finally, years later we get them and while not being Trendmasters based, they are extremely solid. I defended the Reaction figures after seeing their AVP ones in a ToysRUs and having a little fondness for the clear Predator and the other neat little variants. The Godzilla ones offer the same experience for me.

Not to mention those absolutely banger box cards and the even better SDCC ones. Making me want to buy another set for out of the box reasons. Hopefully they continue producing these. I'd love to see others like Ghidorah and SpaceGodzilla.
Last edited by SpaceG92 on Sat Sep 24, 2022 10:24 pm, edited 1 time in total.
My Tohokingdom Thread | DeviantArt | Instagram | Youtube

With NYCC looming I anticipate that we will see another Toho exclusive of some sort. GITD G57, Mothra, and Rodan seem like the logical choices to round out the first wave but i have my fingers crossed that we'll finally see that Shogun Rodan that Brian's been hinting at since the TK interview (EDIT: I say "hinting at" even though he outright confirmed Rodan was coming)

I'm also very curious what they have planned for Godzilla day this year. Kyle mentioned in his chat with Salzilla that we could expect one more Ultimates wave before Christmas, and the timing seems right for a ReAction wave 2 reveal. Things have been pretty quiet on the Toho front with them lately, hopefully there is some news on the horizon.
Last edited by Fermix on Sun Sep 25, 2022 3:28 am, edited 1 time in total.
Top

Super7 released a couple of simplistic Toho Halloween masks. $20 a pop. Nothing special but could be fun for the kiddos The box says they're sized for adults.
Top

The lack of information regarding how sturdy the plastic is, along with the additional shipping being almost half the price of the mask alone, makes these an absolute no-go for me.

It’s a shame too, because I really like the Godzilla sculpt. It would be fun to wear to a party.
Top

Creature22 wrote: ↑Mon Sep 26, 2022 10:08 am The lack of information regarding how sturdy the plastic is, along with the additional shipping being almost half the price of the mask alone, makes these an absolute no-go for me.

It’s a shame too, because I really like the Godzilla sculpt. It would be fun to wear to a party.

Assuming it's the same quality as the Universal Monsters masks, it's fairly thin plastic. Maybe if they have any decent Godzilla NYCC exclusives you could throw it in to save shipping.
Top

These are really more for decorating around the house than wearing to parties/as part of a costume.

Honestly, I feel like that’s the one aspect of those old vintage masks that you wouldn’t want to replicate. If they were making it out of a thicker/sturdier plastic or foam-like material but keeping the design itself old school, I’d be fully on board. But for the price they’re asking plus the additional shipping, anything less than that seems a little outrageous.

At least then it could have the dual function of being a quality decoration or something you could actually wear.
Last edited by Creature22 on Mon Sep 26, 2022 11:44 am, edited 1 time in total.
Top

Regardless of the quality, you just know youre going to see people walking around in these at G-Fest next year.
Top 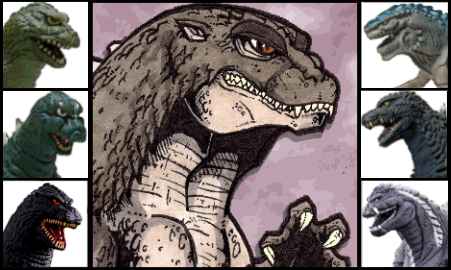 I'm not gonna say anything productive....I'm just gonna tell you the Heisei series is better.
My collection: https://www.instagram.com/executive.hamster/
Top

I really hope we see footage of someone robbing a bank wearing one. That's when you know we've reached Disney levels.