For the discussion of non-Toho monster media, tokusatsu franchises, and also for mixed discussion of Toho and non-Toho kaiju media.
Post Reply
1360 posts 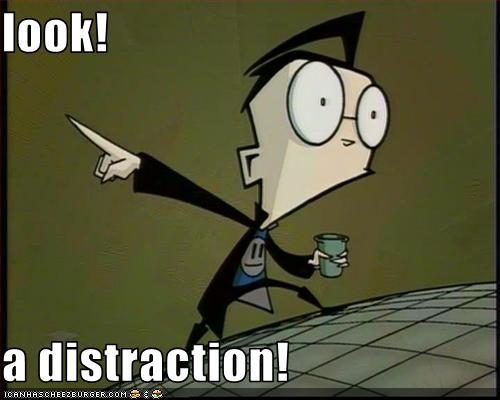 Holy mother of based, this is the single best Predator design I've seen in a long long time.

PREDATORS writer, Alex Litvak, talks about what was pitched, but damn it all. Wasn't picked up for the sequel for the 2010 PREDATORS flick. Basically picture it, "Die Hard in space ! With Predators !"
https://bloody-disgusting.com/movie/362 ... nt-happen/
"All literature is one of three stories: a man goes on a journey, a stranger comes to town, and Godzilla Vs. Megashark. "-Leo Tolstoy.
Top

And buy it in Hardcover. 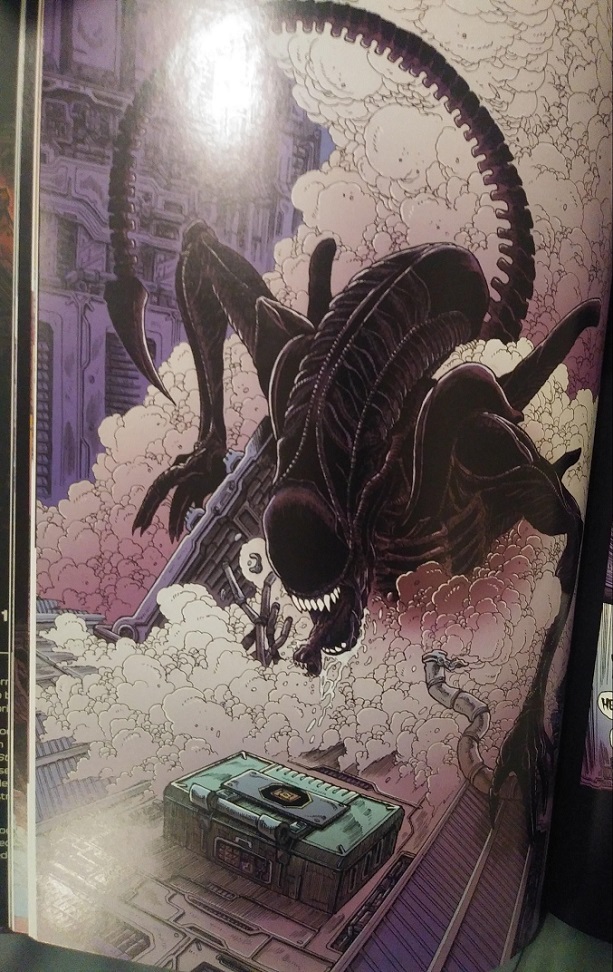 On the subject of inevitable crossovers with the Aliens ,and Predators with the Marvel characters. One that seems to be a natural to me would be the family of one Sergei Kravenoff, a.k.a. Kraven The Hunter, having a history with the intergalactic big game hunters. Which in turn might've motivated either a descendent, or Sergei himself getting into the big game hunting obsession. Maybe even having a Pred helmet, spear, or some other implement of death in Kraven's trophy case. When one, or band of Yautja show up on one of their hunts, Kraven always keeping an eye out, an ear to the ground for any incidents, murders coinciding with the Predator M.O., leaps on the opportunity to bag his fill. 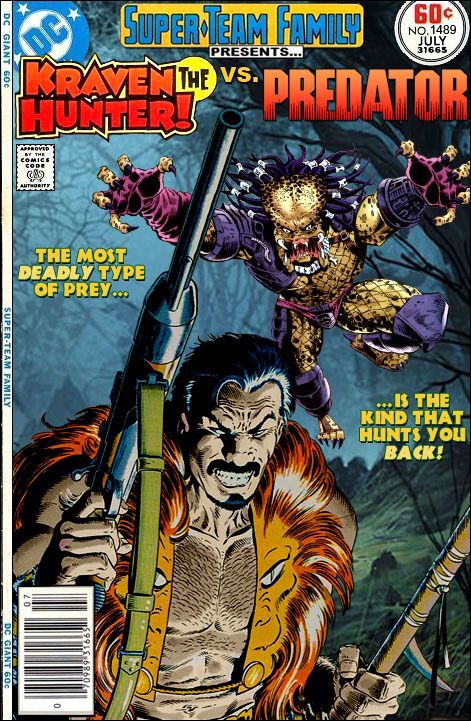 Another match-up I'd like to see is one with a Predator going up against Jack Russel, a.k.a. Werewolf By Night. Either one sets his sights on the lycanthrope. Or else there's a Predator out there that likes to come to Earth ,and hunt lycanthropes exclusively.
Last edited by The One and Only on Sat Sep 26, 2020 6:51 pm, edited 2 times in total.
"All literature is one of three stories: a man goes on a journey, a stranger comes to town, and Godzilla Vs. Megashark. "-Leo Tolstoy.
Top

It can't be any worse than The Predator, right?
My Game Ideas Page | My Blu-Ray Collection

I really want to be excited for this considering I like ''10 Cloverfield Lane'' but The Predator was SO bad I have yet to finish it and have tried multiple times. It's going to take a really good premise to get me remotely interested in it.

An if the plot says there is some sort of ''Super Predator'' anywhere in the script I am automatically out. It was the weakest part in Predators and I absolutely hated it in The Predator.
Be yourself; everyone else is already taken - Oscar Wilde

I love the Predator, but every time new media is announced I feel a sense of dread. Oh well. Here we go again.
So then Worf suddenly has a purple space bazooka...
Top

I mean, I don't wanna jinx it, but I trust Dan Trachtenburg a HELL of a lot more than Shane Black even if he's only directed one movie, 10 Cloverfield Lane was pretty great.

And it'd be pretty hard not to top an autistic superkid with cheap gags made about his ASD thrown in for good measure (real skreeonking classy) who somehow manages to summon the Thanos of Predators with a weird alien dog... thingy which just happens to be hunted down by a group of mental health patients with military backgrounds (somehow, someway yet again) topped off with weeks of reshoots and them having to cut scenes because of a pedophile unknowingly being cast until literally the last second.

Trachtenberg is a solid choice, hopefully it's a pleasant surprise like 10 Cloverfield Lane was.
~ Tyler

There's a time in a place when a franchise desperately needs to end or die.

The Predator is one of those.

Apparently hadn't learned from the last movie. Autism is the next step in evolution!

1. If I start getting carried away, I simply just log off and come back later.
2. Think before I suddenly post.
3. Try not to post image only posts even if they're just for fun and jokes.
Top

Good to hear. Hoping this will be something worth it, or at least more competent then The Predator (though I guess at least this won't have a dying studio desperately trying to make a last minute profit breathing down it's neck

What does Disney have to do with any part of this production other then financing it technically.

They're making Deadpool 3 R-rated and will probably name 20th Century Studios as the distributor as well. Marvel Studios can still produce (which they apparently are) as long as Disney doesn't have to have their name or castle logo attached to it.
My Game Ideas Page | My Blu-Ray Collection

Both franchises have another movie in the works yet are both past their prime. Personally, I think the future for both is dead for a while. Very unfortunate.
Top

Just saw Predators for the first time. It ain't perfect but it's pretty damn good. I like that they didn't have non stop predator action. That showdown with the Yakuza guy was one of my favorite moments in the franchise.
I still can't believe The Predator got made

PitchBlackProgress wrote: Minya’s got class, dude one-shot Ghidorah and got all that MonsterLand p****y afterwards.

edgaguirus wrote:Your climax sounds better than the one we got in the movie.

Major sssspielberg! wrote: ↑Wed Dec 02, 2020 4:04 pm Just saw Predators for the first time. It ain't perfect but it's pretty damn good. I like that they didn't have non stop predator action. That showdown with the Yakuza guy was one of my favorite moments in the franchise.
I still can't believe The Predator got made

It's been a while since I've seen it, but I don't remember it being all that bad.

But yeah, the less said about The Predator, the better.
My Game Ideas Page | My Blu-Ray Collection

I watched Prometheus and Alien: Covenant over the Christmas weekend. My thoughts:

As a longtime fan of the ALIEN franchise, I always felt that it was a misstep to give the Xenomorphs any sort of origin. Ridley Scott has said in interviews that he was surprised that after four movies, nobody had tackled the question of "Where did the Xenomorphs come from?"

The thing is: none of us were really asking that question. The creatures were scary not just because of their appearance and freakish life cycles, but because they represented the meanest of mean streaks that Mother Nature could develop...albeit in the furthest reaches of space. So, tying their origins into the origins of humanity makes the universe smaller than it was before, and less scarier as a result.

That said, the score is great; the effects are magnificent; there are some great individual scenes; and the monsters--when they appear--are neat. And the movie continues the proud tradition of the ALIEN franchise by featuring a strong female protagonist (Noomi Rapace) without shoving it down our throats that she's an empowered female.

And the film hints at an unused story idea that the Engineers wanted to destroy humanity to get revenge for the crucifixion of Jesus Christ, who was an Engineer himself. The fact that the story might've gone that route brings to mind a similar plot point in John Carpenter's PRINCE OF DARKNESS.

Alien Covenant (2017) - I watched this last night for the very first time. I had wanted to see this in the theaters, but there was nobody to accompany me. And then the lukewarm reviews started piling in and I just set it aside.
I really wish they had stuck with Ridley Scott's original idea: That Shaw (Noomi Rapace) and David (Michael Fassbinder) would go seek out the Engineers' home and in the process, discover just who created their creators, albeit with a horrific twist. But then the lousy fanboys started complaining about how "we want more Xenomorph" and we got this film, an attempt to please both Ridley Scott and said fanboys. In the end, I don't think anyone was satisfied because the direction the story takes makes it even harder to reconcile with the original ALIEN than the last movie.

I honestly wouldn't mind if we got less Xenomorph simply because I think we've done everything we can with them. I would rather they find other cosmic horrors because in the Alien universe, space is a vast, horrific place with lots of dark corners that remain unexplored for a good reason.

Instead, we get an ambitious bad idea: an adaptation of Richard Wagner's DAS RHEINGOLD, but in sci-fi form. The development of David the Android as the Devil, the supreme menace to God and Man, ends up taking away a lot of the menace of the Xenomorphs themselves and makes the universe even *smaller* than when the Xenomorphs' origins were vaguely tied to the Engineers.

That said, the first half or so, leading up to David's arrival in the film, is both interesting and intense. The Neomorphs were grotesque and freaky creatures and the Medbay sequence was great. The movie also has a fantastic, creepy original score. And, as usual, the lead female (Katherine Waterston of the Fantastic Beasts series) is great, too. I'm glad that Sigourney Weaver was the original protagonist, because the incel a-holes can't complain that this film is pandering to the PC people whenever a new female protagonist springs up.

The movie was a box office disappointment, but they're going ahead with Alien Covenant 2, so here's hoping they make a better movie.
My Kaiju Blog: Catedral de Kaiju - Video Movie Guide for Kids (1987)

My 1st book: It's All About the Style: A Survey of Martial Arts Styles Depicted in Chinese Cinema
Top
Post Reply
1360 posts